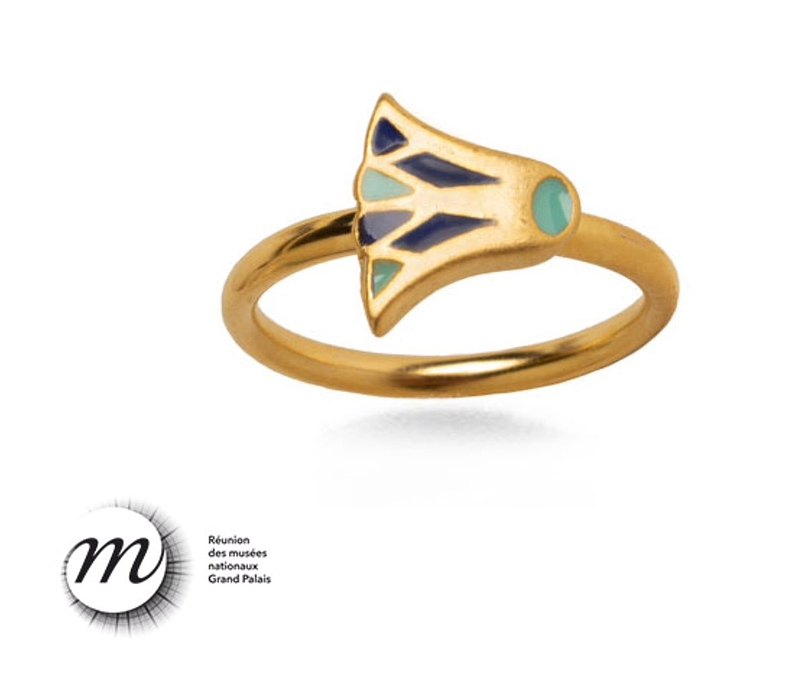 This ring is inspired by the decorative patterns of the New Egyptian Empire ring collected in the Louvre Museum in France. The ring appeared in the first dynasty and was often worn during the Chinese Empire. The cloisonne technique used here was highly appreciated by the ancient Egyptians. Symbolism has always played a very important role in Egyptian art. The lotus flower, as a frame on both sides, is directly related to the idea of rebirth. The sun rises from this flower every morning. In the Book of the Dead in Ancient Egypt, there is a chapter devoted to the rebirth of the dead in this respect. Red evokes the concept of energy and vitality, The deep blue of lapis lazuli symbolizes the deep blue of the night sky, The light blue of turquoise symbolizes joy. Material | Gold-plated, turquoise Size | 1.8 cm, lotus: 1x0.8 cm (the ring size can be adjusted by yourself) Origin | United States "Museum Reproductions, Inc." The main design and production of jewelry from museums around the world licensed and authorized creation. The jewelry produced is from the collections of museums or creations based on authorization. For 35 years, it has become the main supplier of jewelry for major museums. Cooperating with the British Museum in London, the Metropolitan Museum in New York, the Musée d’Orsay in France, and Philadelphia in the United States The Art Museum, the Van Gogh Museum of the Netherlands... and other major museums in the world.

Material
Other Metals
Where It's Made
United States
Popularity
Listing Summary
The lotus symbolizes rebirth and the sunshine needed for the growth of flowers, the red agate symbolizes vitality, the dark green lapis lazuli symbolizes the dark night sky, and the light green turquoise symbolizes joy and joy.