Material
Paper
How It's Made
Handmade
Where It's Made
Japan
Unique Features
Pinkoi Exclusive
Stock
Down to the last 6
Popularity
Listing Summary
Sengoku warlords and historical figures are represented in sumi-e. It will be a postcard with the original sumi-e print. Please note that this is not an original picture. 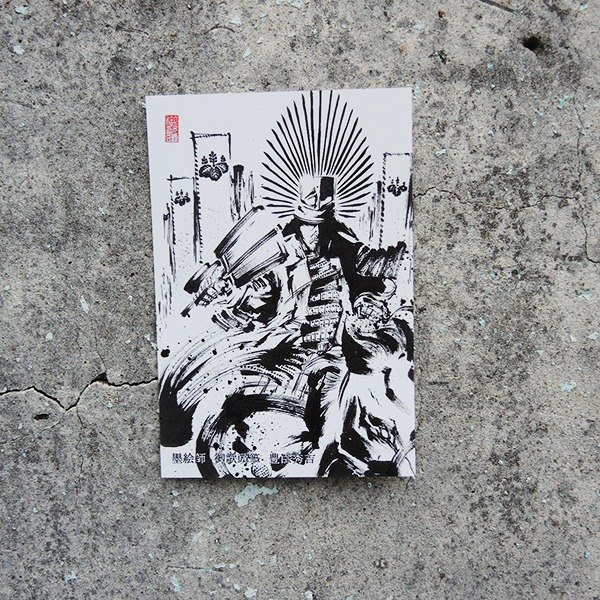 Sengoku warlords and historical figures are represented in sumi-e. It will be a postcard with the original sumi-e print. Please note that this is not an original picture. Hideyoshi Toyotomi, or Hideyoshi Hashiba is a warlord, daimyo, Tenjin, Kanhaku, and Taiko from the Warring States period to the Azuchi-Momoyama period. One of the three heroes. First, Mr. Kinoshita was renamed to Hashiba. As the family surname, he originally claims to be Mr. Taira, but after he changed his name to Mr. Fujiwara after the Konoe family, he changed to Mr. Toyotomi. It is said that he was born in the home of the lower class of Nakamura-go, Aichi-gun, Owari Province. Initially, although he served the Imagawa family, he worked for Nobunaga Oda, and gradually became prominent. When Nobunaga was attacked by Akechi Mitsuhide due to the change of Honnoji, he returned to Kyo with "Great Return of China" and defeated Mitsuhide in the battle of Yamazaki, then won Nobunaga's grandson Sanboshi and won the power battle inside the Oda family, I got the position of Nobunaga's successor. He built Osaka Castle, became the Minister of Kansai and Taisei, received the name of Toyotomi, and subordinated the daimyo of all over Japan to achieve the unification of the world. After the unification of the world, it proceeded with domestic integration through a number of policies across the country such as Taiko inspection, sword hunting orders, sociable decree, and Ishitaka system. There are various theories, but during the role of Bunroku and Keicho who decided to conquer Ming and sent to Korea, he entrusted Hideyori, a son of a son, to Ieyasu Tokugawa and the five great elders. After the death of Hideyoshi, Tokugawa Ieyasu won the battle of Sekigahara and seized the world, and the Toyotomi family fell. The Toyotomi family was destroyed by the Edo Shogunate in 1914 (1614) to 2015 (1615) in Osaka. Sumamata's One Night Castle, Kanegasaki's exit, Takamatsu Castle's water attack, China's Great Return, Ishigakiyama One Night Castle, etc. are widely known as wisdom, and the life that came from a peasant to a heavenly person was It is described as "The world's best". Origin/Production method Japan