Material
Plastic
How it's made
Machine-made
Origin
mainland China
Stock
Down to the last 4
Popularity
Listing summary
Design by Ora Ito. 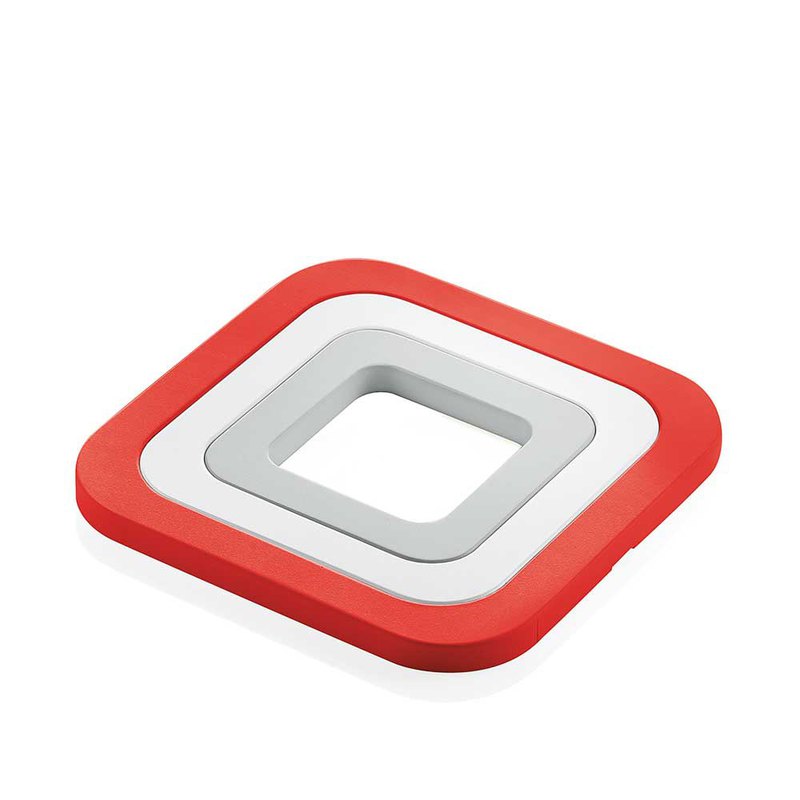 Kitchen 3 in 1 is a new trivet that does the work of three, multiplying the possibilities for heat protection or expanding the surface for large pots or baking dishes. The trivets snap together firmly, are easy to separate and can be easily hooked together; they have a convenient, safe slip-proof base. Design by Ora Ito. Collection: Kitchen Designer: Ora Ito Type: Table Mat Material: PA|Silicone Color: Red Dimensions: 15CM × 15CM × 1CM(H) https://c1.staticflickr.com/5/4862/31343138207_bc80bdf743_z.jpg https://c1.staticflickr.com/5/4855/45369075205_2ab636ee65_z.jpg https://c1.staticflickr.com/5/4890/45369075535_14ec7bc5aa_z.jpg https://youtu.be/XRf1_g3jt3k Designer Information: Born in 1977, this iconoclastic artist became globally famous at the end of the 90’s by hijacking in 3D the products of the most emblematic and international brands such as Vuitton, Apple, Nike and Bic. When customers tried to purchase these imaginary products the orders flooded Ora-Ïto’s web site. This became the second digital works ever acquired by the National Funds of Contemporary Art (FNAC). During the year 2000, Ora-Ïto dedicated himself to his own studio and the creation of real products, by developing transversal projects of nearly all the business sectors of design, architecture, communication, and so on. In 2002, he received the Award for the best design for his aluminum Heineken bottle as well as his original capsule packaging. His first lampONE LINE, which he drew for Artemide with a single continous rangy line was celebrated by his peers during the Furniture trade show of Milan in 2004 and was crowned with a Red Dot Design. In 2005, the curator of the 1st European center of contemporary art, Marie-Laure Jousset, offered him the opportunity to organize in the French Cultural Center of Milan his first big monographic exhibition which he baptized with irony « MUSEORA-ÏTO ». His original vision of the brands pushed him to the front of the international scene very early with an impressive catalog of customers which include Adidas, the group AIR, Thierry Mugler, Toyota, Biotherm, Levi’s, Davidoff, Nike, Danone, Kenzo, LG electronics, Guerlain, Ballantine’s, L’Oréal Professionnal, Sagem, Habitat and Christofle. Ora-Ïto continued to elaborate the objects of our future environment for the most prestigious furniture and lighting corporations such as Zanotta, Cappellini, Artemide, B&B Italia, Frighetto. ,His name has become a real brand of design corporation. Among his projects of architecture, we count in particular the nightclub “Cab”, place du Palais Royal in Paris, the Nike French showroom (2003), the “Brightness of Star” shop for Mugler Parfums (2005), the European flagship store of Toyota on Champs-Elysées (2007), the new architectural charter of showrooms and dealers of Japanese builder in Eu. https://c1.staticflickr.com/5/4853/45369075615_f3d3b62973_z.jpg