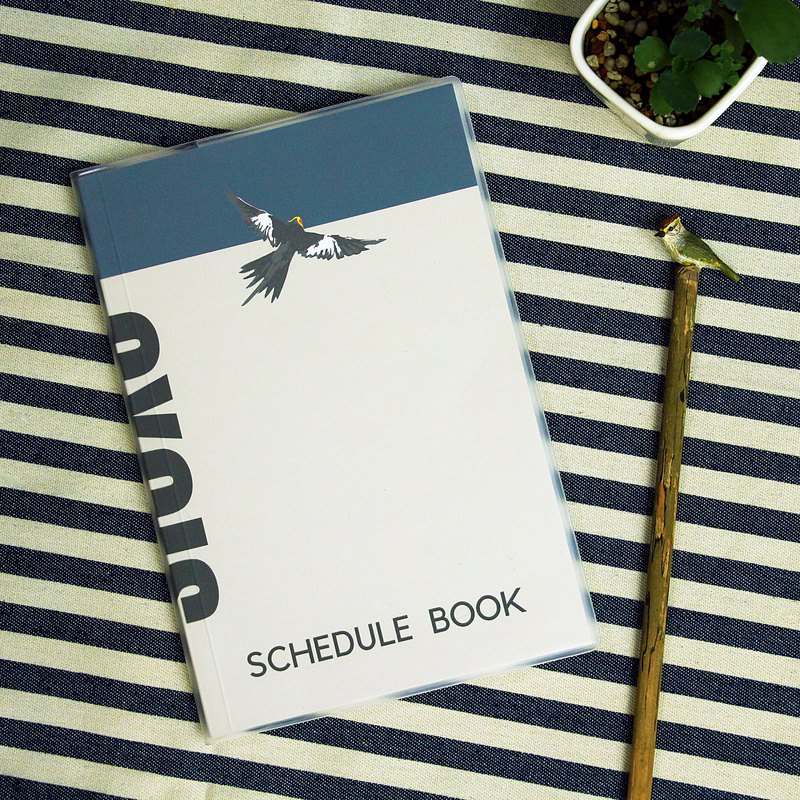 It is a timeless handbook. Of course, it is the same as before. It contains many bird treasure illustrations, as well as many annual plans, monthly plans, and weekly plans. The little tender chicken has been worried about the choice of binding for a long time. Because I want to carry the light and thinness, I abandoned the hard hardcover solution, but the soft binding will have a thinner outer skin. Considering that the handbook will always be carried, I finally decided to choose PVC. Cover (this PVC cover is commonly known as the environmental protection book cover in the shop, which can be reused), but the outer layer does not use the opp packaging bag. There is a fog film on the cover to increase the texture, but also to prevent slight water splashing and dirt. As for the joys, sorrows and sorrows of the delivery brother during delivery, the cushioning packaging material is still inevitable, so I have to say sorry to the earth. This handbook uses gradation as the backbone of the design, emphasizing harmony, tolerance, and diversity. It can be flattened at 180 degrees using manual soft thread. Of course, you have to press it with your hand to stretch the paper. Considering the durability and binding cost, it can't just rely on gravity to fit on the desktop after it is opened. The size is B6 (slightly larger), the inner page has 128 pages, followed by 202X MARK (1p), annual plan (2p), monthly plan (24p), weekly plan (100p) and color page (1p) . The cover uses an extremely unstable configuration. I want to give a sense of movement in the static state. The large area of light-colored blocks leaves room for personal freedom and imagination. Is it a bird that spreads its wings and soars in the wilderness? Or being hunted by an eagle? Or is it a bird in a cage that escaped from captivity and regained freedom? For the first time, the abbreviation of my fan was greatly stretched across the back of the book, but it was cut into three pieces while being displayed. The simple fonts below represent this item, which belongs to the body and mind. Its position makes the unbalanced picture stop at the moment of falling, which is a skill. Another feature is that the front side sees the back side, and the back side sees the front side. How should the two sides of the world be divided? The subtle watershed between the predecessor and the behind, the unstable configuration of the back cover is achieved by the spread of the wings of the bird and the light-colored area in the center. Maintaining it will not collapse, the English in the middle is "The world is worse than you think, but you are stronger than you think", which is my experience during this period of sinking. This time MARK is designed as a Character word search. You can circle the year used in this handbook and the bird treasure in your home. The listed monthly bird species in order are: Munia, Batan, Golden Sun & Little Sun, Pulsatilla, Black Phoenix, Tiger Skin, White Eye, Keck, Monk, Starling, Moon Wheel, Little Parrot & Peony, among others In addition to the above-mentioned bird species, there are also sparrows, geese, ducks, turtledoves, macaws, grey parrots, Senegal, honey suckers, and cross-spots in the weekly plan. The annual plan uses the Gantt chart format, so that everyone can freely arrange, record their itinerary and plan. The grid size used in the monthly plan is 2.6 cm* 2.6 cm, combined with the illustrations of the main bird species of the month and large-scale silhouettes, to keep enough writing space without being too monotonous. Because it is a timeless handwritten form, so the dates and festivals and other signs are left for everyone to write by themselves! Zhou Jihua uses the most popular format of the 2016 version over the years, with a large grid of 5.8 cm* 5.8 cm with hand-painted bird and treasure illustrations. In addition, in order to make each bird's treasure stand in the most eye-catching position, the format of some pages has been adjusted, and each box is only marked with the week, because it is a timeless handbook, it is only on the date, month or festival. Please trouble you to fill in according to your needs. The last page is a color page, quoting the sonnet of British Victorian poet Elizabeth Barrett Browning. The love of birds and treasures is pure, and this is also the last answer to everything in the world. The following quotes the mathematician John Nye Xu Lai expressed his thoughts for Xiaonenji. "I've always believed in numbers and the equations and logics that lead to reason. But after a lifetime of such pursuits, I ask, "What truly is logic? Who decides reason?" My quest has taken me through the physical, the metaphysical, the delusional - and back. And I have made the most important discovery of my career, the most important discovery of my life: It is only in the mysterious equations of love that any logic or reasons can be found" -Prof. John Forbes Nash Finally, I would like to thank the contributors this time: Avila Huang, Amy Yayun Cheng, Ann Ling Chiao, Anna Tseng, Annie Liu, Bass Wu, Chia Yu Lee, Chiu-Chiu Shirly, Emma's, Eric Lee, Fion Yeh, Ireni Koo, James Lin, Jhan Syuan, Josie Feng, judy629730 , Kwy Kan, Liao Emily, Masaki Lee, Mollie Tsai, Mong ChenWang, Ni Ni, NL Billie, Orange Lin, Reine, Shin Lin, Shioubii Liu, Wei Feng Chang, Weiwei Lin, Yi Hsuan, Yu Rong Chen, Yu-Chen Tsa, Yu-wen Wang, Wang Meijie, Wu Didi, Wu Yujuan, Shen Aqi, Lin Feifan, Lin Xiuwei, Lin Mengqian, Lin Lingfeng, Lin Wanru, Lin Jingping, Lin Yuxuan, pretending to be strong, Hong Jingyi, Ji Xiaoguai, Hu Mengting, Zhang Xiangxiang, Liang Yating, Liang Kaiyun, Chen Yuye, Chen Jintang, Peng Zijia, Zeng Beiying, Huang Rufeng, Yepiqiu, Wonton, Duck Box Po, Huang Binbin, Su Zhengfen, Lu Lu, Huang Weiwei, Yang Yiying, Jiayou Niaobao.