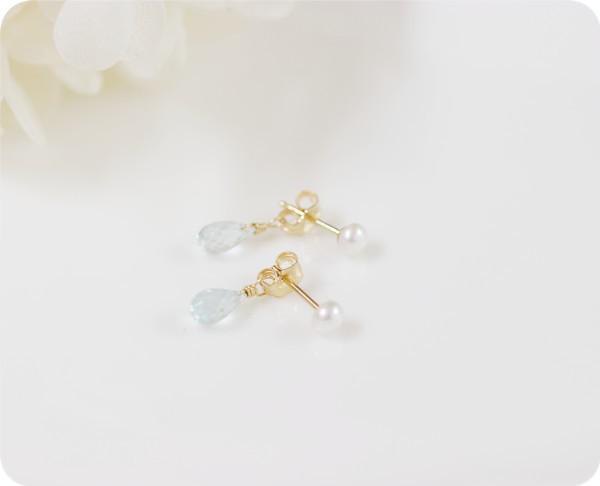 Never argue too much, it is modestly pierced presence. It is highly recommended for those who ask elegance and elegance ~ Of course commuting, it fits parties and weddings too ~ 可能 There is a possibility that the part of the metal may be visible to the person whose pierced hole position is lower Material of bracket part material: excellent durability 14 kgf stone: (RALULU.SHU is not cheap shellfish pearl, it is using authentic freshwater pearl with good quality) Why not use shellfish pearls? The price is cheap, there is no scratch, the shape is also good, but it looks cheap compared to natural pearl, it is because it is not elegant. Freshwater pearl (pearl): about 3 - 4 mm shape: button spots and spots of loose: almost no terrier: very strong (Drop briolette cut) Aquamarine: About 7 to 8 mm Aquamarine is a stone with a lot of inclusions, things with a small amount of inclusions will cost tens of thousands of yen, but this time we will also offer low price and high quality items. Overall size: about 12 × 15 mm (post about 9 mm) ************ Beautiful blue stone symbolizing "happy marriage" March birthstone When worn, it fills with a purely healing energy like leaving yourself in a gentle ocean. It also has the power to harmonize people, so it will quietly give you a reconciliation of married couple and lover. Aquamarine is also called "angel's stone" and is said to symbolize beautiful youth and happy pleasure. It is a popular stone as a stone that symbolizes "happy marriage" and is blessed with children's treasures, so it will be pleased as a gift to those who are waiting for marriage. Aquamarine sometimes called "The Queen of the Night" to increase the brilliance at night. It is said that "When it gets lost in the walls and darkness of life, it brings new hope of light" from its characteristics. By wearing it will protect the owner with the light of hope in the voyage of the life that will proceed from now It is a birthstone of June. Stone words such as "health, wealth, longevity, purity" etc. Fresh water pearl bringing happiness Freshwater pearls are regarded as stones with strong power to repel disaster. It is said that there is an effect that will prepare the environment so that you can spend happy every day of the person holding it. Pearls are not stones correctly. However, freshwater pearl is exaggerating negative energy, it is said that it will shine charm, and various effects are expected, so we treat it as power stone. Freshwater pearls are known as love jewels because they have a power to exhale evil and attract a mind of opposite sex and are often used at wedding ceremonies and the like. It is said that freshwater pearls have stronger protection from ancient times and protect the owner. You can expect effects such as relieving depression and irritation. Because the power of guardian is the strongest, there is also the power to protect children from accidents and diseases. It has the same effect as a shellfish compassionate pearls and grows in the body, and it is said to be effective as an amulet for pregnant women and easy delivery. For the same reason it is expected to be blessed with children's treasures. Increasing femininity, effective freshwater pearls for beauty and health It is said that freshwater pearls have an effect of raising the motherhood of women and enhancing beauty and femininity when wearing them, and it is said that Cleopatra was worn as a beautiful talisman in the old. When wearing a freshwater pearl, a good side of a woman is drawn out, there is an effect to cooperate, and the appearance is also feminine beauty along with the inner side. From ancient times it has been believed that this stone has the power to preserve youth and health.