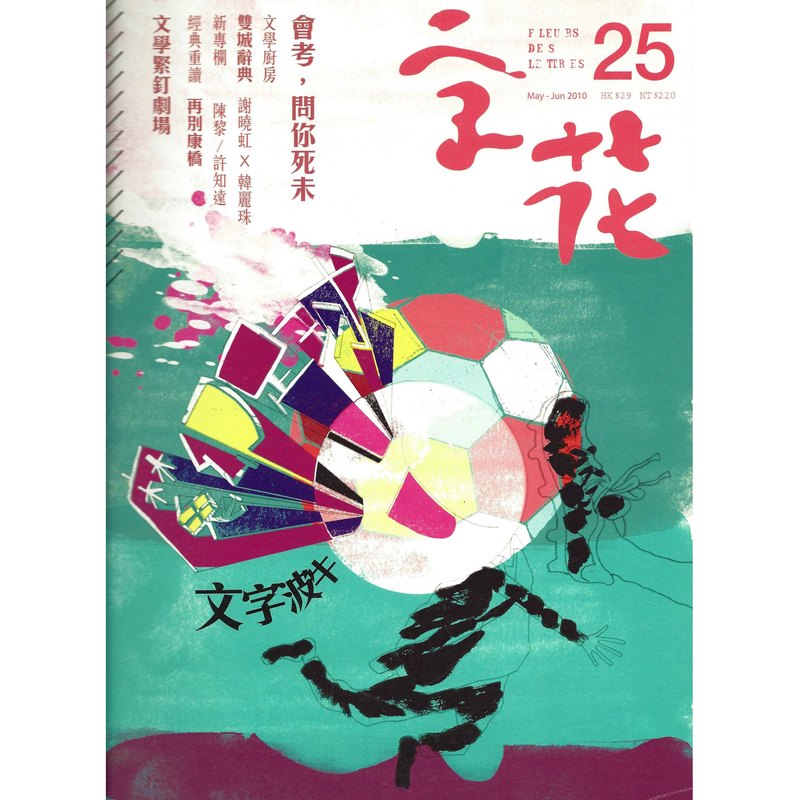 Bimonthly, "boiled fish culture" published, published every single month, in business, triple, world, China, Kubrick, Page One, Eslite, Musical, Preamble, Yulin, Pastoral and other available. Partial stock is limited and is on sale. Magic football The summer of 2010 is the time when every football fan is looking forward to the World Cup. The emotional energy that football can summon in Hong Kong probably will not be lower than a baseball game in Taiwan. However, for fans and non-fans, the sport is just a sign of youthful memories, sweat and masculinity. We invite the authors to carry out all kinds of fantasies, that is, to release football from these old-fashioned imagination! Yuan Siu-chang reflects on the same surreal Hong Kong history for decades with his magic skills. Ashu will take the AV version of Shaolin Soccer with laughter in conjunction with a football match. Long days and Liang Wei's poetry Refers to the fictional football team, and the crazy state of the fans; Tan Sang Hei, Zheng Zhengheng and Selections Seamus Heaney (Poetry) will be the stadium widening the border. Cheng Zhanwei, who has been writing articles for the column, can not resist the temptation to detonate all kinds of fantasy about football with a few youtube. The world (cup) it's good for us crazy. Will test, ask you not dead The summer of 2010 also ushered in an important shift in the examination system in Hong Kong. Accompanied by generation after generation of candidates will be canceled, usher in a new open examination. Of course, we can not be reconciled to the chance of "letting go". For this purpose, we invited five friends especially for joke or ridicule. The pressure of exams, nightmares of K books late at night, anxiety symptoms of anxiety and anxiety, and will not disappear with the end of the exam: boring annoying, absurd degree will always be like shadow. The album also contains the mysterious customs of the candidates word of mouth, all kinds of tears in the experience of tears, I believe readers in Taiwan do not feel strange. We all grow up like this. Other exciting content: Literature kitchen Twins Dictionary: Xie Xiaohong. Han Lizhu New column: Chen Li. Xu Zhiyuan Classic reread: Farewell Cambridge Literary tight nail theater Feature story: Pee on the pitch? Ling Bo micro-step turned the ball? Tend to block his teammates the ultimate invalidity? Deng Zhengjian look contempt. "How magical?" Ten minutes later, the online media completely conquered the consumers whose appetite was raised: Japan, where 100 primary students and 11 professional footballers fought to 2: 2 draws; Germany, the philosophy that television comedians played The families, divided into Greek and German teams - Archimedes handed Heraclitus, and then pass the far post of Socrates. Socrates head hammer goal! Hegel and Marx around the ball card dispute ... ... can not be loaded with calm Deng name editor [1] occupational disease, "life depressed, weird magic football!" Crazy. "You'll never walk alone." The interviewee who accompanied us had just made up a team. The answer is clear. Readers can imagine this lineup of famous people, one day appeared in the magic scene on the court - Hong Kong Football saved! Yuan Siu-chang also positioned the story in Hong Kong. From the magic of Gordon's father and son, it reflects the same surreal local history for decades. Perhaps thanks to Aoi's gratitude to the fans, Ashoka combines novels into the setting sun in local porn movies with the same neglected local soccer matches to strike a clean sweep between the two. (Editor Eddie even Pina, suggested that Ashura to the "Football Captain" challenge - Dai Zhiwei: Taylor Lai! Mai Tai Lai: Zhiwei! Dai Zhiwei: Taylor! Mai Tai Lai: Zhi Wei! These call each other in the process, but also mixed "!", "Hey!", "上!" And a lot of exciting assorted words. BL is simply a comic.) <Fiction from the World Cup Football Fight Myth> refers to the fictional football formation, tantamount to four fans in the collective rehearsal before the annual rehearsal for a fan: the reality is the most magical form. Liang Wei poetry between the actual situation and the real line of intersection, wrote the crazy state fans, such as the defeat of the love team to blame for their direct broadcast to join in the show, is not it more imaginary than she imagined in the virtual scene more strange? <Fair Play> is another way. Tan Hsiao-hsi picked a joking, market-like tone and tempo to summon us to become fantastic football mobs: do not act as pseudo-spurious fans in front of the TV screen! The Garden painting <rub rub>, Zheng Zhengheng's "goalkeeper anxiety on the penalty kick", and Peng Rengqing selected Xiemeisi. Seamus Heaney's <Markings> two poems, all by contrast to the magic of football to deal with. The rubbing wave reverses the three contrasts of heaven and earth, light and heavy, fast and slow, by setting the balloon in an inverted world; Zheng's poem tells the anxiety type that the goalkeeper unfolds at a fixed point Fantasy, how to try to stop a constantly changing time and space invasion of the game; Sinny's poems overlap another upside-down world in this realistic space of football stadium: "It all goes into you as if they were both doors and door-going ... so they are like boating on fixed land . " Cheng Zhanwei, who has been writing articles for the column, can not resist the temptation to detonate all kinds of fanaticism about football with a few paragraphs of YouTube. The world (cup) it's good for us crazy. - Note 1. The word flower has two names surnamed Deng. Another editor surnamed Deng coldly said: "Football is a trivial exercise!" Do not confuse readers. Origin / manufacturing methods Hong Kong