Material
Gemstone
How it's made
Handmade
Where it's made
Japan
Unique features
Customizable
Stock
Down to the last 2
Popularity
Listing summary
Simple Amethyst stud earrings. Changeable to earrings, Please specify from the option column. 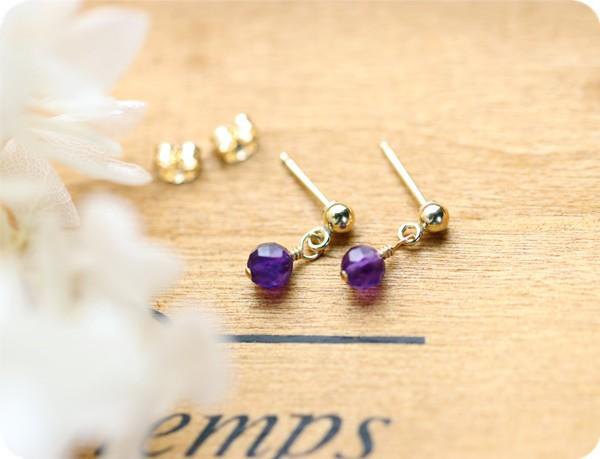 Wrapping is possible for ~ ~ ~ + 250 yen ♪ ~ ~ ~ Instagram: ralulushu Also works and videos are also UP ・ Material -K14 Gold Filled -(Land cut) amethyst: about 4.2 to 4.4 mm, ・ Size -Total length: about 1.2 cm ※ We try to shoot in colors close to the actual thing as much as possible, but the impression changes depending on the condition of the light is a feature of natural stone. *************** February's birthstone that protects the "true love" and emits the most noble glow Amethyst Power Stone Meaning / Effect Amethyst called “Guardian Stone of Love” and “Stone Protecting the True Love” is famous as a birthstone for February. Amethyst purple, which is considered to be loved by many people since ancient times. Especially in Japan, it is said to be the noblest color, and it is said to be a color that has been highly valued in religious ceremonies. Historically, it is revered as the highest color in the "Corporate Twelfth Floor" established by Prince Shotoku, and in particular in China it is said that only the emperor is allowed to wear it. By the way, among the crystal color variants, it has been rated the highest. It is said that by giving birth to the "Love and Mercy Heart" as it is called "The Guardian Stone of Love", it gives the power to protect the true love. In Europe, it is also said that there is a “stone that impresses a lovely lover,” while there is “a power that calms too much enthusiasm.” It can be said that such a power stone is a wonderful power stone that greatly supports love fulfillment. In addition to the passion of love, it is also one of the spiritually powerful stones that are said to heal, calm and calm the stressed and tired mind. *************** ・ K14GF (14 gold gold filled): Unlike thin gold plating of gold layer, it is the one crimped by heat of the gold layer of 1 / 20th weight of the base metal. ***************