Material
Wood
How it's made
Handmade
Where it's made
Hong Kong
Unique features
Customizable
Stock
Down to the last 3
Popularity
Listing summary
King Kong has a hard and incomparable meaning, and it is auspicious. 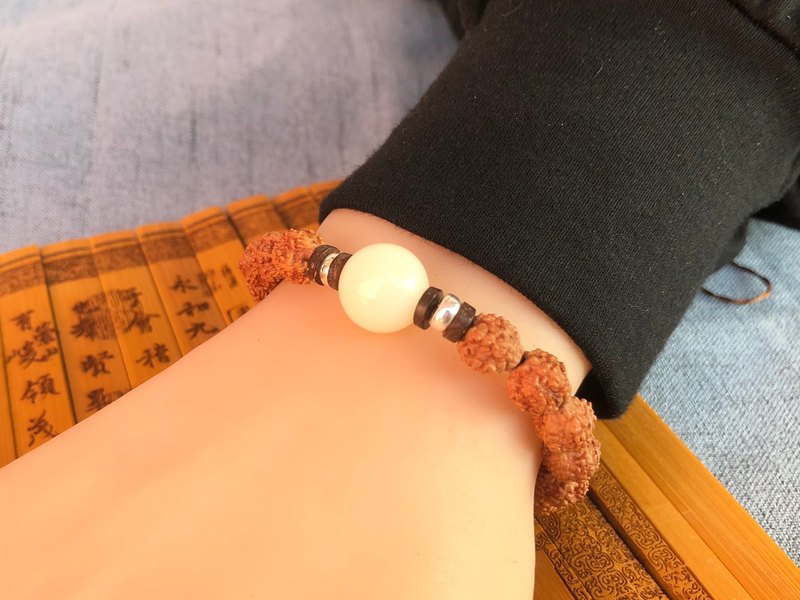 Warm reminder: Because SF can not send metal objects, Yan Yan can only entrust the postman to send blessings for everyone. King Kong (Rudraksha) It is a large evergreen broad-leaved tree, mainly grown in the plateau of more than 2,000 meters above sea level in the tropical and subtropical regions. The tree is perennial, the leaves are green, the trunk is cylindrical, rounded, the bark is white, and its rudraksha beads are full. It has a blue outer shell after maturity, so it is also called blueberry beads, which can be used to treat various diseases. According to the number of petals, they have different mysterious meanings, which are generally divided into 2 to 17 petals. King Kong: It is hard and invincible, and it can destroy all evil forces. When Emperor Tantra practiced the Diamond Department, he needed to use the diamond rosary. According to the introduction of Buddhist books, the son of the King Kong tree is also said to be the son of the Bodhi tree. It is very valuable and is produced in the area where the Sakyamuni Buddha became enlightened. There is a tree in this area that grows very large and tough. Therefore, Sakyamuni used his disciples to wear them to read Buddha, read the Fa, and recite chanting, so he named it "King Kong Bodhi." In fact, Vajra Bodhi, the real connotation is "Shiva's tears (or eyeballs)" in Hinduism (National Education of Nepal and other countries). The name "Shiva" appeared in the Hindu era, and his prototype was generally considered to be the god of the storm of the Vedic era, Ludra. Shiva, also translated as "Shiva", is the meaning of kindness, symbolizing prosperity and auspiciousness, and at the same time symbolizing destruction. The Buddhist literature calls him a great self-contained, living in the top of the color world, the owner of the three thousand world. There are eight incarnations of earth, water, fire, wind, air, day, month, and sacrifice, and they have the power to destroy and regenerate. And his third eye on his forehead is a weapon that is more terrible than a nuclear bomb. This eye is always closed. Once it is opened, it will spurt the raging fire of destruction and destroy everything that is seen, even God will not be spared. The god of love that once lured Shiva was burned to ashes by this eye. The legend of Vajra Bodhi comes from this, so it is often believed that Vajra Bodhi has endless energy and has different functions depending on the lobes. As a bead, Vajra Bodhi is usually used as a counting or rosary. The monks in the temple seek equality in all things. They can’t be eager for quick success. They only sing the rosary when they are chanting Buddha’s prayers. When they are ordinary, they only hang on the neck. Let's go with the flow. Maintenance: Try not to get water. If you accidentally soak it in water, be sure to dry it with a soft cloth and put it in a cool and sheltered place. Otherwise, it may easily lead to irreparable mistakes such as cracking and molting. . A humid environment can cause a mildew reaction in Bodhi. Once this happens, remember to wipe the mildew with a soft cloth immediately, generally without affecting the normal effect of the Bodhi. King Kong's best way to play is to play, but the usual playmates feel that the natural disc play is slower, so there are three-point and seven-point brushes on the market. The brush really helps to color. Diligent brush can not only grout, but also clean the dirty things inside the diamond teeth! Therefore, only the multi-disc brush is the best maintenance method for Vajra Bodhi. Moreover, in summer, people tend to secrete a lot of oil, so summer is the most suitable season. If you have oily skin, it will be easier to color the diamond. The above is taken from the long-formed network data (although it is still very long....) In fact, it is self-cultivation. This is Yan Yan’s opinion. Friends feel that~ Main beads: 12-13mm white bodhi Bracelet: 9mm Vajra Bodhi Accessories: 925 silver wheel beads, coconut shell #观自由 # Believe in yourself is the most important