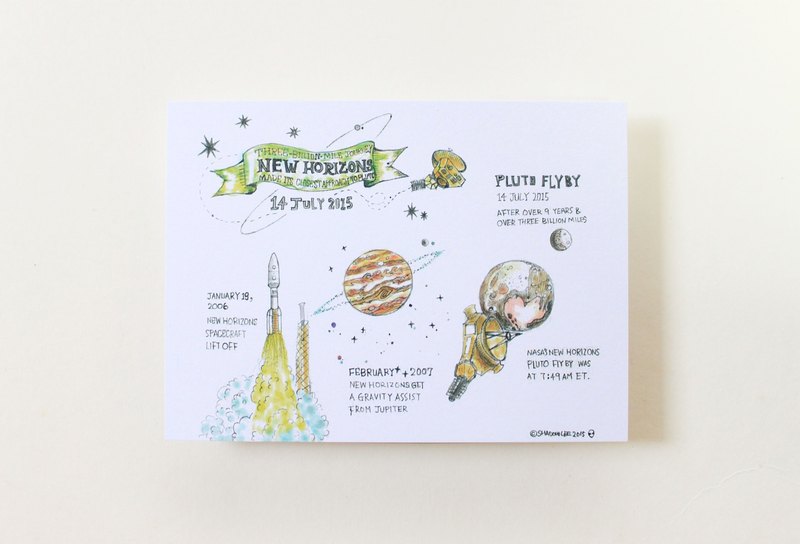 NASA launched the "New Horizons" space probe in January 2006 Start a long journey to explore Pluto and the Cooper Belt. In February 2007, "New Horizons" increased its speed with Jupiter's gravity boost This flight, nearly ten years Finally, July 14, 2015, 11:49 am GMT (19:49 Taiwan time) "New Horizons" successfully flew past Pluto at close range and took a clear picture of him and Charon Pluto is finally no longer a mosaic, fuzzy planet But it has a big love on the surface, and it looks like the cute dog named Pluto Pluto in the Disney cartoon! Excitement, like the Rosetta-Phila probe landing on Comet 67P in November 2014, If we can witness these in our lifetime, the miracles created by mankind to explore the universe are not in vain. Material | Ivory Card Size | 14.2x10.5cm - I hope to bring astronomy into everyone’s daily life through illustration creation Make astronomy more close to the people and more life I hope more people can learn about astronomy from the pictures and texts and embrace the beauty of astronomy - Origin / manufacturing method Taiwan

Material
Paper
How It's Made
Machine-made
Where It's Made
Taiwan
Stock
More than 10
Popularity
Listing Summary
July 14, 2015, 11:49 am GMT (19:49 Taiwan time) "New Horizons" successfully flew past Pluto at close range and took a clear picture of him and Charon