Material
Wood
Where It's Made
Taiwan
Stock
Down to the last 1
Popularity
Listing Summary
Da Vinci's manuscript invented the "Flight Machine" - a historically inspiring invention, a DIY model that 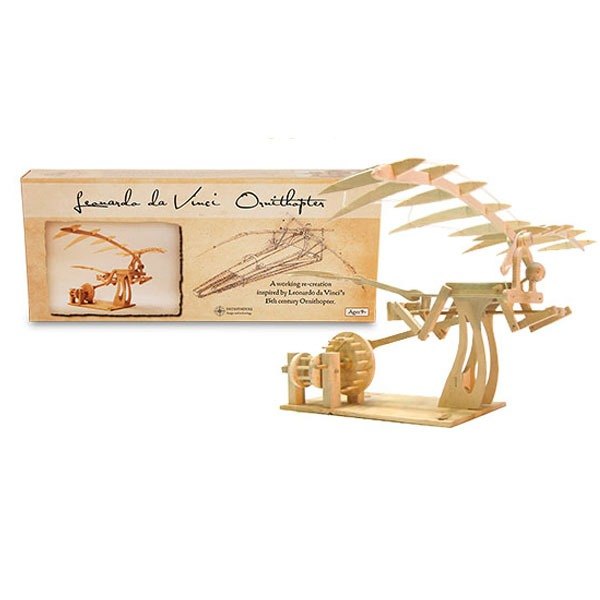 https://www.youtube.com/watch?v=aZI85oreTew&feature=youtu.be Flight has always been a human dream. Da Vinci also has considerable enthusiasm and interest in birds and various human flying machines. Da Vinci's flying machine (flapping machine) meets the imagination of generations of people, and this wooden DIY component incorporates his cool flying machine and bevel gear design, can turn the gear mechanism to make its components work, or It is a pure suspension as a scientific show! Even though there are still some unsolved mysteries about the flapping machine in the modern era, there are already many museums from all over the world that have exhibited similar invention machines. Now you can also assemble them by hand to show Davinci’s smart and flying flying machine. The device can be reappeared in the world, playing the best effect of edutainment. "About Da Vinci Manuscripts" Leonardo da Vinci took notes every day for the rest of his life and wrote it in his own unique mirror image (starting from the bottom right corner of each page, from right to left, and writing up and down). Because his notes are for his own reference only, the structure is scattered, the fonts are scribbled, and there are no punctuation marks. Although some speculated that Da Vinci was in order to keep secrets, a more plausible view was that mirroring and writing was only a matter of left-handed writing. Da Vinci's research in science and engineering is as impressive as his artwork. About 13,000 pages of notes and paintings in the manuscript are all made up of records of mixed arts and sciences. These records come from Da Vinci's observations and his constant creation during his travels. Da Vinci manuscripts are divided into several categories: painting/engraving/architectural/physiological/anatomical/zoological/astronomy/geography/philosophy/story/letter. These manuscripts of different sizes were originally distributed in the hands of friends after his death. They are now mainly collected in museums, library rooms or libraries around the world. Product specification: ► Product size: 43 x 58.5 x 30.5 cm ► Material: logs, string, 5ml adhesive ► Canadian Design Made in Taiwan Precautions: ► Please stay away from the fire ► Please take care of children swallowing small parts ► This product is suitable for use over 9 years old ► Please note that the appreciation period is not equal to the trial period. If there is an assembly, it will affect your return rights. Please keep the package intact when returning for replacement. If there is damage, it will be difficult to return. ► Books, merchandise, gifts, etc. that are covered with plastic film are subject to the return policy. If the film has been unsealed, no returns will be accepted.