A Journey to Happiness the Legendary of Taiwan Endemic Species postcard 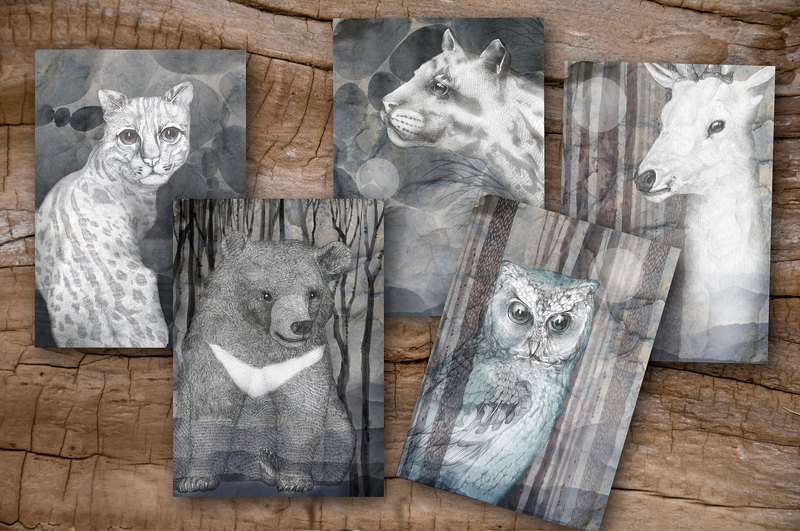 "A Journey to Happiness" the Legendary of Taiwan Endemic Species is a postcard series designed to illustrate the beauty and culture of TAIWAN/FORMOSA. Selecting 5 precious endemic species to introduce the beautiful stories behind them. - Formosan Sika Deer Once upon a time, the Thao Tribe, one of the indigenous peoples in Taiwan, tried to chase a white deer through the forest. Over the hills they pursued and persisted; in the end, the deer led them to the beautiful and pristine SUN MOON LAKE, which later became their home. Pluck up your courage and chase your own white deer that will finally lead you to the place of your dream. Embrace your journey to the blissful promised land. - Formosan Collared Scops-Owl The indigenous peoples in Taiwan believe that the owl is the patron saint of the forest. When you see it perch near the house, lingering and staying, this is a sign that the lady of the house will soon be pregnant. Once the baby is successfully delivered, the owl flies away. Some of the tribes, such as Amis, even think the owl’s hoot may reveal the gender of the unborn baby. Therefore, the owl is perceived as not only a messenger of good tidings but also a guardian of women and children by the Amis, Bunun, Thao, and Puyuma tribes. - Formosan Black Bear In Bunun language, Formosan black bear is called "Tutumaz", which means "hero". Legend has it that the black bear once helped Bunun people resist the invasion and beat the enemies. Later, the tribe and the black bears made a vow and commitment to settle in Yushan (Jade Mountain), and guard this secret place peacefully together. - Formosan Clouded Leopard In the ancient times, the ancestors of Rukai crossed the Central Mountain Range of Taiwan, and moved to the mountainous areas from the east coast of Taiwan. Led and guided by the agile Formosan clouded leopard, Rukai people finally came to Wutai, a perfect place for tea growing and farming, to establish their tribes. Rukai people who live in this area thus deify the clouded leopard, and call themselves "the descendants of the clouded leopard" nowadays. - Formosan Leopard Cat Formosan Leopard cat, also known as the " Money cat " because this beautiful creature covers yellow-brownish shining hair with brown-black spotty patterns that look similar to the coins on its body, it is regarded as a symbol of wealth and called "money cat" since the ancient times. Tsou people once found an abandoned baby boy protected by the Formosan leopard cat in the forest. Even after the baby was brought back to the tribe and was in good hands, the leopard cat still came to the boy to guard him and kept him accompany until the little one returned to perfect health.