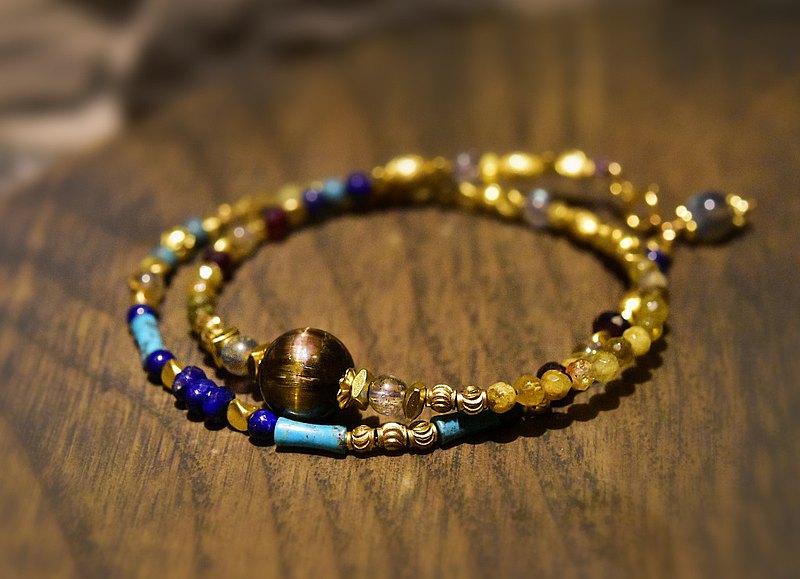 Under the shade of green-hot and sunny, lush green forest, beautiful eyes, cool feelings, flowing in the green, green trees frolicking in the sun, enjoy the undisturbed comfort ◆Carefully selected natural stone cat's eye tourmaline turquoise green garnet lapis lazuli moonstone feldspar red garnet ◆Protect your own safety, increase popularity, and release positive energy ◆Symbol: hope, luck, wealth Stone Cat's Eye Tourmaline 10mm Turquoise 7mm x 2mm Green Garnet 3mm Lapis 3mm Moonstone 4mm Labradorite 5mm Red Garnet 4mm Cat's eye is a golden emerald with a cat's eye effect. Gold and blue cat's eye are relatively rare, and its detailed fiber reflection is like cat's eye. It belongs to one of the world's five precious gemstones, and also belongs to the opal series, including aquamarine cat's eye and tourmaline cat's eye. Owing to the scarcity of production, the possession of opal has always been regarded as a symbol of good luck, and it is also a precious gem that is popular with court nobles. In the ancient book "Langhuan Ji", in the early Tang Dynasty, a foreign envoy brought a rare and precious gem from the lion country of the Indian Ocean to the tribute court. It was the two Tang Xuanzong locks in the peony box that were later called "Lions" The cat's eye stone reached the Yuan and Ming Dynasties, The royal family's love for opal has reached its peak, and "Mitsubishi-shaped gold ornaments" inlaid with opal were also found in the tomb of Emperor Wanli in the Ming Dynasty. People believe that opal can bring good luck and brilliance, and its abundant vitality energy can contribute to career breakthroughs; it is also often carried as an amulet or praying for health in the East. Business development and business-related work are very suitable for wearing opal, which can help to improve luck and determination; while traveling, you can also carry opal jewelry to protect yourself and pray for a smooth journey. Turquoise is also known as turquoise and turquoise. The highest grade turquoise is saturated, bright and uniform blue. In the ancient Persian culture, turquoise was a gem that had the power of heaven and earth. Most of them were made into amulets; the mummy of the Egyptian queen who was unearthed 5000 years ago, wearing four golden bracelets inlaid with turquoise; the ancient Chinese culture of Yangshao There are also two turquoise fish-shaped ornaments in the relics unearthed from the site; in the collection of the Hubei Provincial Museum in the mainland, you can see the bronze swords with turquoise made in the Spring and Autumn Period, which shows that turquoise can be said to accompany human history An important gem of evolution. The ancient Indians and Tibetan culture both believed that turquoise was the embodiment of the power of the deities. Carrying turquoise beads or ornaments on their bodies can protect their own safety and block ominous things. Wearing turquoise can enhance courage and positive energy, and bring luck and good luck.