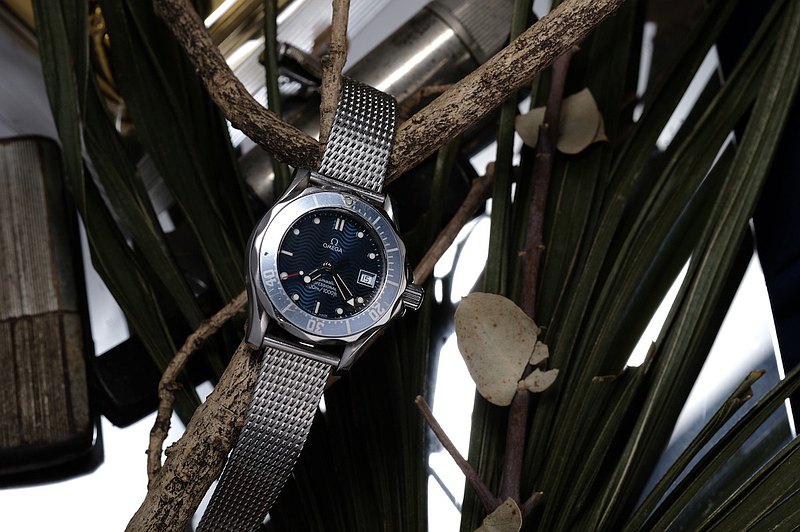 Omega Seamaster 300m 2583.80.00 28mm Seamaster series with date shallow water meter female watch pair watch The demand for diving watches began in World War II, and OMEGA’s first diving watch was the Seamaster 300 launched in 1957. It was adopted by the British Royal Navy and was as classic as the blancpain TR900 adopted by the US military and the Rolex 5513 adopted by the French Navy. The three ancestors of the shallow water table. Close to the military watch that year and popular in the market is the seahorse ancestor 165.024 in the 1960s. This shell shape has always been the classic shell shape retained by the hippocampus at series aqua terra and railmaster. OMEGA has spared no effort in the development of diving watches, and the OMEGA Seamaster series is an indispensable member in the history of diving watches. From hippocampus, hippocampus 300 to hippocampus 300 meters, OMEGA has always infused the latest technology, so OMEGA hippocampus 300 meters has a handsome appearance, but also become synonymous with professional diving watches. In the 1970s, the Seamaster 600 and Seamaster 1000, which were waterproof to 600 meters and 1000 meters, were introduced. The Seamaster Professional series was officially launched in 1988, which further established the image of diving watches from the diving watch. In 1993, the Seamaster diving 300 meters was launched. The watch can be said to be an important milestone for OMEGA in professional diving watches. The handsome appearance quickly captured the hearts of the people, and the market response was very good. The Frenchman Roland. Roland Specke wore this seahorse diving 300-meter watch and set a world record for free diving in live water up to 80 meters deep in Lake Neuchâtel, which can be regarded as a successful test of the performance of the watch in the actual deep water environment. . The seahorse 300-meter female watch introduced today in the early 2000s has a classic shell shape born in 1993, and OMEGA specially redesigned the series on the occasion of celebrating the 25th anniversary of the shell shape in 2018, using new materials and Technology, while retaining the original design and the essence of the ocean, this shell type is the current shelf model. It is quite similar to the current model on the current shelf, and it is matched with the original OMEGA Milano belt 6011, which is retro and not old-fashioned. This match is quite close to the Haima 007 ceramic outer ring limited edition omega 210.90.42.20.01.001 released this year. 28mm medium size . Timing outer ring. Lock-in faucet. Lock-in bottom cover Oxidized timing circle, light sky blue, elegant and retro. The water-corrugated face plate, metal hour markers, and empty sword needles are quite moving under the change of light and shadow. Omega seamster 300m 2583.80.00 * Between lugs: 14 mm * Bracelet: omega steel 6011 Milan belt * Case: Steel * Case diameter: 28 mm (without crown) * Crystal: rounded sapphire crystal mirror * Water resistance: 30 bar (300 meters / 1000 feet) * Movement: OMEGA cal.1424 (with date) * Precise quartz movement, rhodium-plated finish. Battery life indicator. * Battery life: 32 months * Swiss Made /// Use it with precision and peace of mind when the oil washing and maintenance are completed /// #omega #seamaster #sm300 #seamaster300m #divewatch #women #watch #vintage #2000s #sale #swiss #浅水表#女表#配件#饰品#配#老物#选品#时尚#风尚# Switzerland#手环# Jewelry#老品#style#古物#古着 Female watch, old things, antique, design, style, taste, girl, gift, Swiss watch, omega, old watch, antique watch

Material
Stainless Steel
Where It's Made
Switzerland
Stock
Down to the last 2
Popularity
Listing Summary
The model from the early 2000s, matched with the original OMEGA Milano strap 6011, is retro and not old-fashioned. This match is quite similar to the Haima 007 ceramic outer ring limited edition omega 210.90.42.20.01.001 released this year. 28mm is a moderate size for girls . Timing outer ring. Lock-in dragon