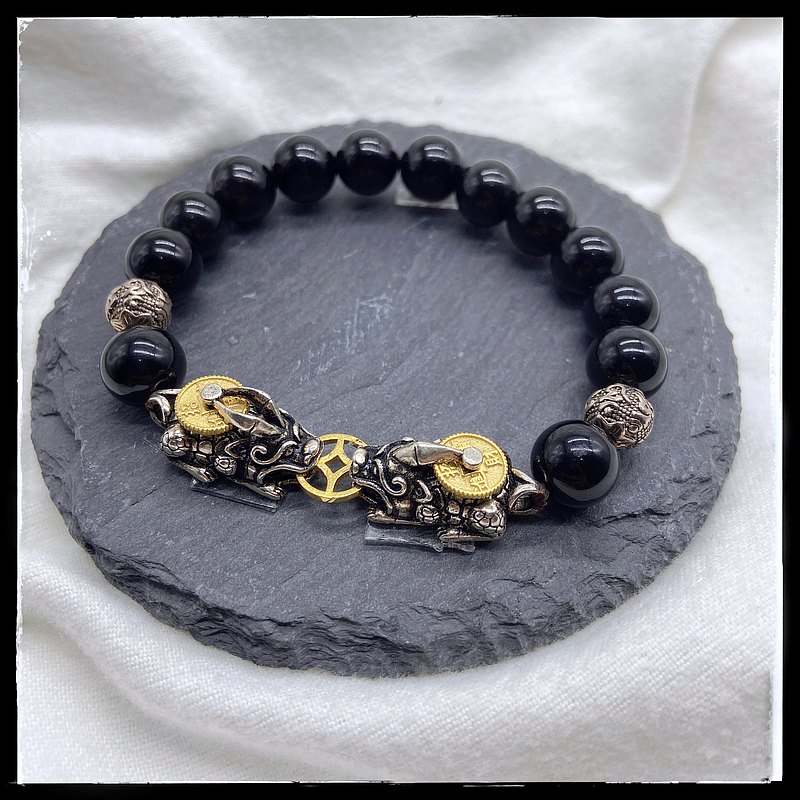 Q: If you want to know why Pixiu can bring wealth Q: If you want to know what effect obsidian has Q: If you happen to find a pair of unique brave Q: If you need to prevent villains, turn evil spirits and avoid evil at the same time This design is designed with this concept ☝️ #貔貅- Wealth, Avoiding Evil, Good Fortune, Town House, Hua Tai Sui It is a kind of lucky beast in Chinese legend-auspicious beast. The dragon head, horse body, and lind feet are shaped like a lion and can fly. It is the 9th son of the Dragon King. Something interesting is that: According to legend, Pai Xiu and his father went to the Jade Emperor’s banquet. Because Pai Yao ate gold and silver jewelry, he ate up all of the Jade Emperor’s 💰 + dorado to urinate and defecate everywhere. As a result, the Jade Emperor was so angry that he was so angry. Ba beat it down, and it happened to hit the butt, and the ass was sealed, so later it was spread that Pai Xiu had a mouth and no ass. ✍️Okay, everyone knows that Pai Xiu can bring wealth. In fact, in addition to wealth, it can also block and avoid evil. So some people are easy to absorb negative energy and are easily disturbed by bad things because of their physical fitness Dai Paixiu's ⭐️ Let me introduce 🔺Pixiu was divided into male and female in the early days The horns on the head are male. When wearing, the head needs to face outwards so that the money can come in to prosper one's fortune; the two horns on the head are female, representing the treasury. Therefore, Sensen still recommends wearing a pair of brave, one biting the money, the other keeping the money, and working together. However, in the later period, Paixiu has evolved. Both are the same, one left and the other right, which also has the same meaning. ‼ ️The point is-Sensen’s brave has one and two corners, and the bronze coin design on the back is rotatable-symbolizing the movement of time. Belongs to the meticulous and unique brave. # Obsidian-Avoid evil, transform evil, prevent villains, help sleep It is a natural colored glaze formed by rapid cooling and condensation of volcanic rocks passing through sea water. Generally, obsidian appears opaque black under strong light, but the surface has magical red eyes or looks like golden sand. The main function Color from the five elements-black-representing water-representing wealth and wisdom In traditional Chinese culture, it is considered to be one of the Gemstone that has the effect of avoiding evil and eliminating negative energy. At the angle of the seven chakras-corresponding to the sea chakra-the perineum (the base of the thigh) is the starting point for all energy. Can relieve stress, eliminate fatigue, and improve sleep quality # Liuzizhenyan Silver beads - lucky, ward off evil, evil #Finally, 🔶Please remember: Fate is destined, but luck can be changed, sincerity is spirit🔶

Material
Sterling Silver
How It's Made
Handmade
Where It's Made
Taiwan
Unique Features
Customizable
Stock
Down to the last 3
Popularity
Product Type
Original Design
Listing Summary
Pixiu-Wealth, Avoiding Evil and Good Fortune, Town House, Hua Tai Sui In fact, in addition to wealth, it can also prevent evil, so some people are easy to absorb negative energy and are easily disturbed by bad things because of their physique. They are also very suitable for wearing brave ⭐️ Obsidian-Avoid evil, transform evil, prevent villains, help sleep Silver Pearl Liuzizhenyan - Lucky, block evil, evil