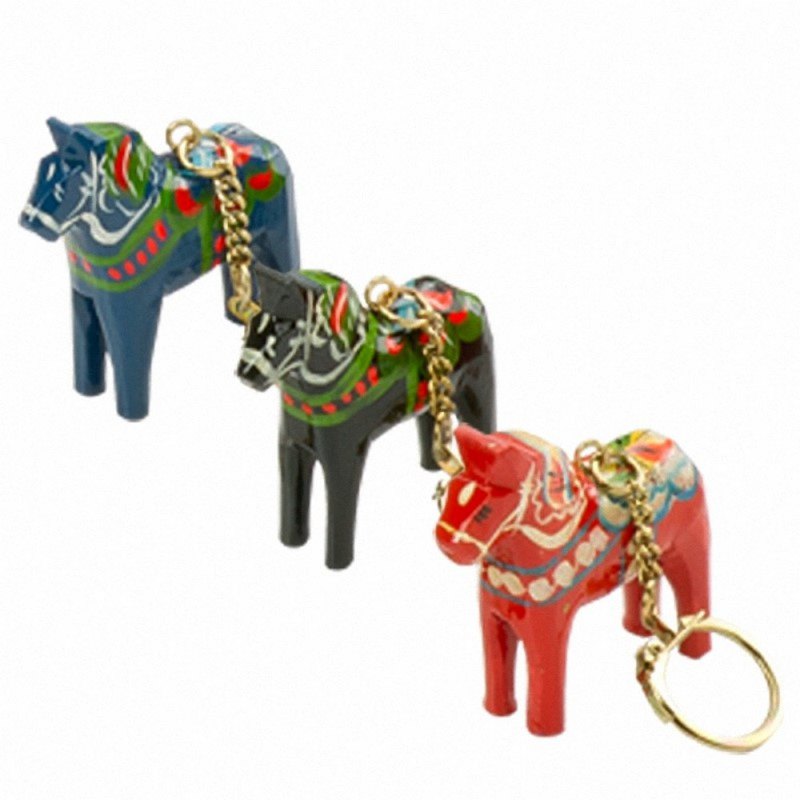 ‧All handmade ‧Made in Sweden ‧Red / Black / Blue tri-color random shipment ‧High-quality key ring is suitable for hanging on bags, mobile phones, etc. The superior charm can highlight its own temperament ‧origin: The Dalahorse, which is regarded as a symbol of Sweden, is from Darlana in the Lake District of Dalana in central Sweden. Around the 17th century AD, people lived mostly from logging in the central Dalarna region of central Sweden. Once workers enter the virgin forest, it usually takes ten days and a half months, and it can even take up to half a year. Lumberjacks miss their children, and some people think of carving small toys out of wood, which can be used as gifts for children when they return home. The reason why the horse became the best model for the lumberjack at that time was because during that period, the logs harvested by the lumberjack were mainly transported to the outside. In order to travel, carry goods, and do farm work, several Swedish houses raise horses. So the horse became the closest partner of the lumberjack and his family. When the trojan horse carved by Dalarna lumberjack became popular throughout the country, people named it after its origin. The real fame of the Swedish Trojan was at the World Expo in New York in 1939. At that time, the workshop in the Dalana area produced a large trojan horse more than two meters high for the Swedish exhibition area, which attracted people's attention. At that time, many newspapers used large photos of Swedish Trojans to cover the exhibition. Its darama, which features strength, courage, loyalty, wisdom, and dignity, is expensive, not only because it is entirely handmade, but the Swedes will never sell it at a reduced price in order to maintain the brand.

Material
Wood
Where It's Made
Sweden
Stock
Down to the last 3
Popularity
Listing Summary
‧All handmade ‧Made in Sweden ‧Red / Black / Blue tri-color random shipment ‧High-quality key ring is suitable for hanging on bags, mobile phones, etc. The superior charm can highlight its own temperament