Düsseldorf-Landscape prints on the Rhine 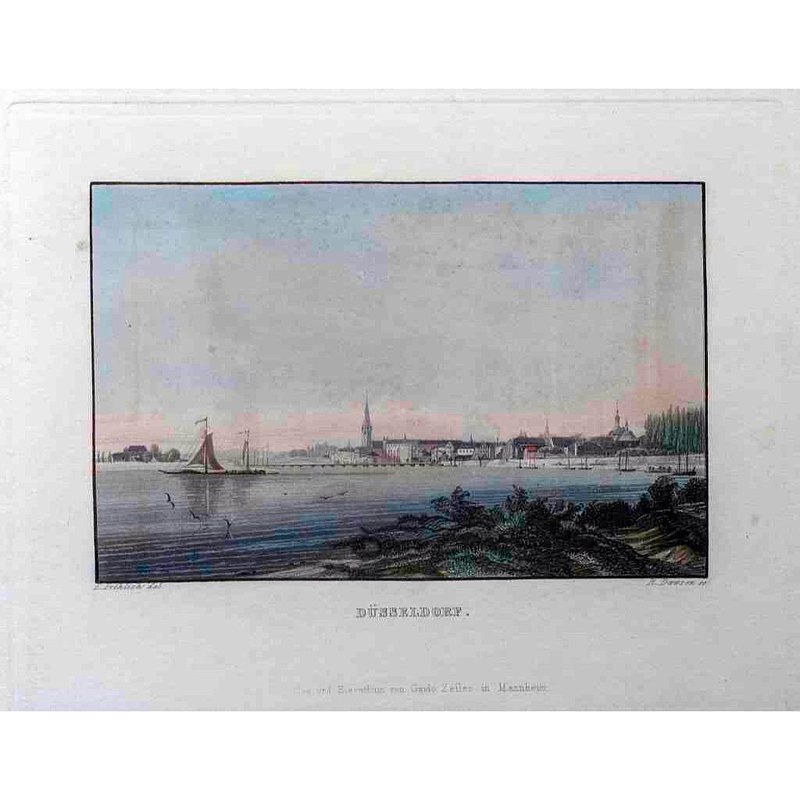 【Picture 1-Picture 4 are the original pictures】 [Figure 5-Current situation in Düsseldorf] [Figure 6-Figure 9 are schematic diagrams] Author: E. Frohlich / JJ Tanner Name: Düsseldorf. Signed: Verlag und Eigenthum von Guido Zeiler in Mannheim (Mannheim Zeiler Press). Technique: powder corrosion method (aquatint), painted by hand. Year: 1848. Size: 11.5 x 17.5 cm (picture). 30 x 40 cm (including jammed paper). Remarks: with cardboard mounting (without frame) Number: DR-021-2 Introduction of works: The Rhine has provided good living conditions for humans and animals since ancient times, and the quaint old city is still a charming scenery on the Rhine. It has attracted many scholars since ancient times, and today it is an important tourist attraction on the Rhine. This illustration is from the book "Rhine" (Der Rhein von Mannheim bis Düsseldorf) compiled by the publisher G. Zeiler in 1848. The picture is made by a delicate powder etching method, and then the whole book is completed by the masterful painting technique of the hand-painted master at that time. Twenty-five illustrations of various well-known scenic spots in the middle section of the Rhine have become items that collectors are competing to collect today. Dusseldorf, the capital of the German state of North Rhine-Westphalia, is located on the Rhine River and is a major commercial town in Germany. Dusseldorf is also Germany's largest overseas Japanese settlement, and there are many Japanese companies in the city. In the 19th century, the famous German poet Heinrich Heine (1797/1856) was born here. More than 4.5 million people participate in the Rhine Carnival in July each year, and Dusseldorf is one of the important bases. Dusseldorf is the seventh most populous city in Germany, with a population of 1.5 million in urban areas. In 2012, the city ranked sixth in the world in the quality of life survey, second only to Vienna, Zurich, Auckland, Munich, and Vancouver. The earliest written record of Dusseldorf dates back to 1135, and was later incorporated into the territory of Berg. In 1288, it was upgraded to become a city. In the seventeenth century, Düsseldorf made considerable progress in literature and art, and then fell due to the lord’s migration to Munich. In the mid-nineteenth century, Dusseldorf was revived by the Industrial Revolution, and its population rose sharply. During World War II, it was bombed by Allied forces and actively rebuilt after the war. Because Dusseldorf is located in the center of the lower Rhine River and has a good port throughput, it has become the economic and trade center of Germany's Ruhr area. *If you have any detailed questions, please send an email to contact the designer *The main merchandisers of this design hall are mainly Western antiques, old jewellery and home accessories, and old European original prints. Old products will inevitably have traces of history, but they are cleverly arranged according to personal tastes and each has its own place, which can promote an extraordinary life Taste and aesthetics. However, those who mind, please consider carefully before placing an order.

Material
Paper
How It's Made
Handmade
Where It's Made
Germany
Stock
Down to the last 1
Popularity
Listing Summary
This illustration is from the book "Rhine" (Der Rhein von Mannheim bis Düsseldorf) compiled by the publisher G. Zeiler in 1848. The pictures in the book are made by the delicate powder corrosion method, and it has become a collection item of today's collectors.