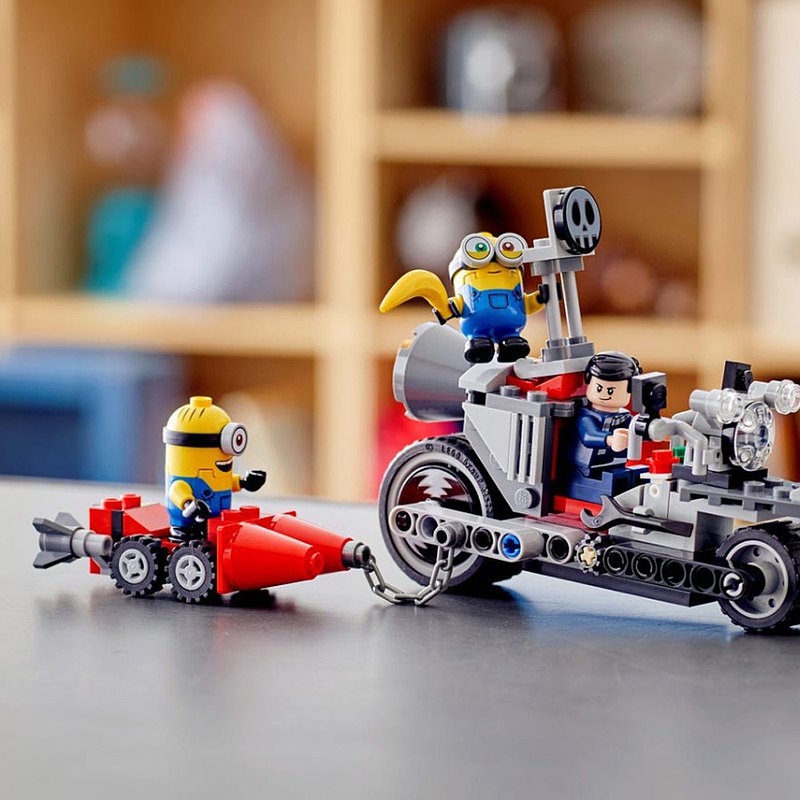 The chase has begun! Help Gru and the little soldiers protect the birthstone, and don't let the villains who want to get it back snatch it. They have to hurry to win by outspokenness and over the bad guys. Fortunately, there is a banana that can be thrown while riding a bike. Gru leads the unstoppable bike chase of LEGO® Minions, and Bob helps in front. At the same time, Stuart was dragged all the way on the Rocket skates, enjoying the thrilling journey. Motorcycle that can't be stopped with this LEGO® little soldier The Chase (75549) building toy motorcycle box set gives your little soldiers and fans an exciting and interesting journey. With 3 dolls-Gru, Bob, and Stuart-the storyline unfolds immediately and never slows down. Fans will love building motorcycles and recreating their favorite scenes and playing roles in the movie "Minions: The Rise of Gru". Play the role of your favorite little soldier Children will love putting Gru on a motorcycle. The little soldiers Bob and Stuart can sit in front, ride behind Gru, or take a trip on a rocket scooter. Let children learn to build The Lego Little Soldier series of children's building toys brings the naughty world of Little Soldier into the home. Instructions PLUS interactive building instructions make building this model more fun. This instruction can be used in the LEGO Life free app for smartphones and tablets. Its zoom and rotation viewing tools help children build Lego granular models independently. • There are many ways to play this set of fun boxes. Gru is on a mission. Children can help. Put the little soldiers in front of the motorcycle, let the little soldiers sit on the rocket scooter and pull them along the road, or give the little soldiers a toy banana as a snack. • Exciting and interesting little soldier toy motorcycle building box set (75549), with Gru, Stuart and Bob dolls. Children can reproduce the awesome scenes from the "Minions: The Rise of Gru" movie, play the roles in it, and enjoy the full-speed action plot. • With this toy motorcycle box set, the role-playing game is so easy. Comes with 3 dolls, including the exclusive Gru Lego® doll limited to this box set. Children will love to conceive their own little soldier story. • Looking for birthday gifts or fun gifts for Xiaobing fans over 6 years old? This box set is a great choice. This awesome toy brings creative fun and is suitable for kids who love building toys and adventures with little soldiers. • This toy motorcycle is more than 10 cm high, more than 13 cm long, and more than 5 cm wide. The size is suitable for creative games. • Want to inspire creative fun? The good news: The power of this little soldier toy box set comes from the imagination of the child-no battery is needed. • With Instructions PLUS in the LEGO® Life free app, children over 6 years old can learn to build independently, giving them a sense of accomplishment as they learn new skills. Each LEGO® Little Soldier series toy box set has interesting characters and imaginative stories, which can inspire children to reproduce the scenes of the movie "Minions: The Rise of Gru" and play the roles in it. • LEGO® building blocks meet the industry's highest standards and the LEGO Group's own quality standards. This ensures that they are consistent, compatible with each other, and can be easily assembled and disassembled every time. • LEGO® Little Soldier series pellets and parts have been thoroughly tested to ensure that each toy box set meets the world's highest safety standards. • Awesome little soldier toy motorcycle building box set, with Gru, Stuart and Bob dolls. • Enjoy the fast-paced fun with building motorcycles and rocket scooters suitable for small soldier role-playing games. • Includes 1 building motorcycle and 3 little soldier dolls, suitable for creative games. • A fun birthday gift for fans of little soldiers over 6 years old. • The motorcycle is more than 10 cm high, more than 13 cm long, and more than 5 cm wide. • Your child's imagination is power-no battery is needed. • Includes Instructions PLUS to help children learn to build. • Use the LEGO® Little Soldiers series box set to bring the exciting and interesting world of the little soldiers into your home. • This toy box set meets the highest quality standards in the industry. • The LEGO® Little Soldier series box sets are tested to the highest safety standards.